Why Aquaventure is your next-best destination in 2021

If you’re in the city of Dubai and looking for some adventure, this is one attraction you’d definitely regret missing out on! One of the world’s largest water parks, Atlantis Aquaventure is sure to give you an adrenaline rush as you immerse in some of the most thrilling rides ever. 2019 was the year Aquaventure, Atlantis the Palm, won the title of the best waterpark in the Middle East and the second-best in the world. And to this day, it sticks to those standards.

TicketsToDo brings you all you need to know about this one-of-a-kind attraction of the Middle East.

Aquaventure waterpark in Dubai – what should you know about this attraction?

But if you think that would be the end of it, then welcome to this new era, where Aquaventure is more ambitious than ever. Besides the existing jaw-dropping towers namely, the Tower of Poseidon and the Tower of Neptune, there is the third much-awaited tower that was installed in the coming year. 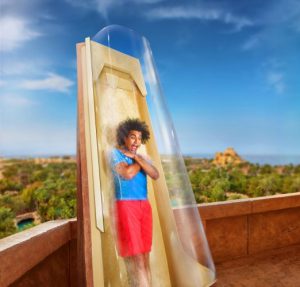 The new tower in the making will be called the Trident Tower featuring 12 brand-new slides. Trident Tower will stand 112 feet tall, making Aquaventure one of the biggest waterparks in the world. The addition of this new attraction will make the existing Aquaventure grow by 30% which means the waterpark will be bigger and better! The New children’s area will be crafted with four mini versions of adult rides, including the new Kidz Tornado 24 and the Kidz Bowl 14 slides. However, there will be more for everyone irrespective of age. It’s expanding by 30 percent!

Something to look forward to on the third tower is the slide known as Mammoth Blast, which is described as a ‘449-meter family adventure water coaster that delivers uncompromising force at unprecedented speed.’ If that isn’t thrilling enough, then there are rafts powered by water propulsion technology, that will take you to winding curves, drops and uphill climbs. 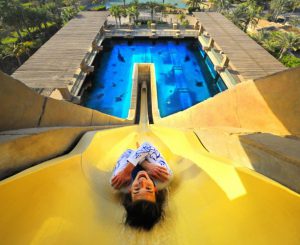 The best technology for the thrills is pretty much the anthem of the new Trident Tower. Water adventurers are keenly looking forward to yet another ride know as the Flying Saucer 20. This hybrid ride unites water and sky with patented sequential jets that slide at high speed. Guests are going to rocket through gravity-defying turns in a wide-open saucer that reckons at maximum velocity.

Another great addition is a social slide known as Rally Racer 32 that allows guests to race each other to the bottom on neighboring lanes. There will also be an updated version of the Leap of Faith slide, featuring two lanes instead of one with each dropping the rider from 111 feet at a whooping speed.

As of now, Aquaventure boasts 20 rides and rivers spread across 17 hectares, which qualified it to be one of the best waterparks in the world. Now, with the introduction of these new features, you can expect it to be beyond this world.

Besides all these new slides and the new tower, the opening of the new expansion will coincide with the opening of The Royal Atlantis Resort and Residences. The property with a 1.5-mile stretch of private beach, 35 restaurants and bars and a beach and nightclub, will make the landmark a happening hub of Dubai.

Also, Atlantis has confirmed that visitors to the waterpark will get two-day access as part of every single-day ticket. Book your ticket to Aquaventure Dubai with Tickets To Do and enjoy access to shark feedings and the Lost Chambers Aquarium.

Book Your Ticket To Atlantis Aquaventure

Is Aquaventure free for Atlantis guests?

Aquaventure waterpark and marine habitats are free for the guests staying at the resort. The day visitors can get access to day passes. However, availability is limited especially when the resort is highly occupied.

Are there lockers at Atlantis Aquaventure?

Yes, there are coded lockers at Atlantis Aquaventure. The users are given wristbands with a barcode which is used for the lockers. As of today, these lockers cost  AED 10 and are spacious enough to be used by more than one person.

How many rides are there in Atlantis?

Atlantis Aquaventure has increased its rides to 105. These include 79 rides across three towers, 26 marine and water sports experiences. Moreover, you get to enjoy at least 26 food and beverage outlets and kiosks across the park.

How big is Aquaventure Dubai?

How much does it take to get into the Atlantis Water Park?

Don’t forget to check out the Lost Chambers Aquarium 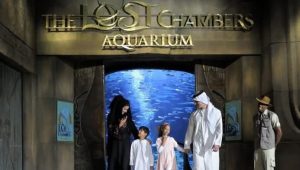 This aquarium is based on the Lost City of Atlantis. Amongst the lost civilization of shipwrecks and ruins, you can engage in an immersive experience. With over 20 marine life exhibits, you can get a glimpse of the mesmerizing marine life as you walk through the glass tunnels of The Lost Chambers Aquarium. Get an up-close view of stingrays, sharks, piranhas, and other aquatic animals with the highlight being the tiniest of seahorses of the underwater world. Don’t miss out on this wonderful opportunity to encounter the most amazing, colorful collection of underwater life within 10 beautiful chambers.

Guided by animal experts, you can also get a chance to interact with some of the creatures and even help feed them.

Check out what to do in Sharjah too. We’ve prepared an extended guide to the city!